The Casting Crowns Only Jesus Tour with Matthew West, has been rescheduled for Saturday, October 17.

“There’s a difference between living in fear and being wise. The Casting Crowns family is praying for your families as we all slow down for a season and try to get ahead of the spread of this virus.” – Mark Hall, Casting Crowns

If you purchased tickets and wish to receive a refund, refunds will be issued at the point of purchase through Friday, March 27.  For those who purchased tickets online or over the phone, please call 888-257-6208. For those who purchased at the Crown Complex Box Office, please be sure to bring your tickets to the box office if you wish to receive a refund prior to Friday, March 27.

With more than 11 million records sold, Casting Crowns has held the position of Billboard’s top-selling act in Christian music since 2007. The band continues to impact audiences with their powerful live shows, having performed for more than 7 million fans. Casting Crowns has also been honored with four American Music Awards (out of seven total nominations), a GRAMMY Award for its 2005 album Lifesong, and seven GRAMMY nominations. In addition, the group has garnered 18 GMA Dove Awards and two Billboard Music Awards from 11 total Billboard Music Award nominations. The Only Jesus Tour marks one of the band’s most successful tours to date.  Through their concerts, Casting Crowns has been able to unite more than 120,000 children with sponsors and it remains a huge part of their calling to take care of the widows and orphans all over the globe. For more information, visit www.castingcrowns.com.

Matthew West is a four-time GRAMMY® nominee, a multiple ASCAP Christian Music Songwriter/Artist of the Year winner and a 2018 Dove Award Songwriter of the Year (Artist) recipient. He has received an American Music Award, a Billboard Music Award, and a K-LOVE Fan Award and named Billboard’s Hot Christian Songwriter of the Year. A recipient of the Rich Mullins Impact Award, West also received a Primetime Emmy® Award nomination for Original Music & Lyrics for the title track for the feature film “The Heart of Christmas.” For more information, visit www.matthewest.com. 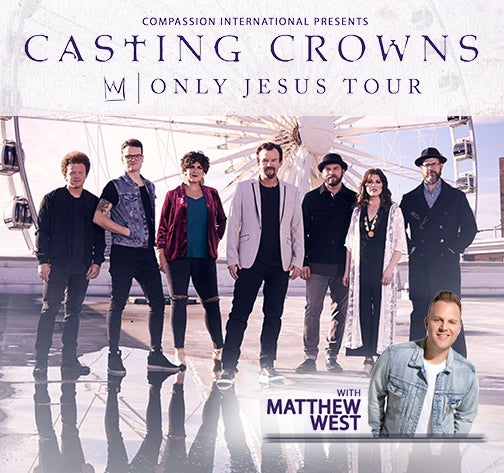