Fayetteville, NC (July 8, 2019) – Comedians Gary Owen, Sommore, Lavell Crawford, Tommy Davidson and Tony Rock are set to bring the “Marquee Comedy Tour” to Crown Arena on October 4. The highly celebrated entertainers will bring down the house with their side-splitting humor and hysterical storytelling for a night fans won’t want to miss!

Tickets go on sale Friday, July 12 and can be purchased online at CapeFearTix.com, by phone at (888) 257-6208, in-person at the Crown Complex Box Office or at Leisure Travel Services on Fort Bragg.

From his early days on BET’s “Comic View” to memorable roles in “Think Like A Man,” “Ride Along” and “Meet the Blacks,” Owen has become one of America’s most beloved comedians, earning the honorary title of “Black America’s Favorite White Comedian” by Ebony magazine.

In her more than 20-year career, award-winning comedienne of “Chandelier Status,” Sommore, has become a trailblazer for women in the comedy business as one of the most successful comedians in the U.S. and abroad. Sommore has been featured in a number of hit films including "Soul Plane," "Something New" and "Friday After Next."

Joining the other comedians on stage are Davidson and Rock, who have been breaking ground in the comedy business and bringing laughs for years with their numerous projects that span from film to television. 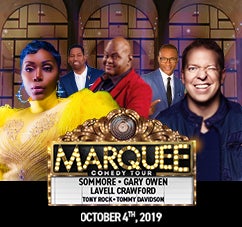