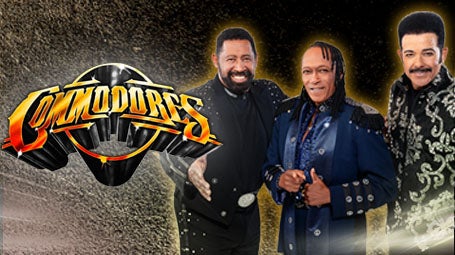 The Commodores to play Crown Theatre on April 14

Fayetteville, NC (February 5, 2018) – The iconic group, The Commodores, will play the Crown Theatre for one soulful performance on Saturday, April 14 at 7:30pm. They will be joined by special guest Landau Eugene Murphy Jr.

Tickets will go on sale Friday, February 9 at 10am. Tickets will be available at CapeFearTix.com, 888-257-6208, and in person at the Crown Complex Box Office & Leisure Travel Office located on Fort Bragg. Groups of 10 or more can save on tickets by calling Alan Singer at 910-438-4111.

For three decades, the Commodores have remained a force in the music industry. The Commodores aren’t just any group. They have staying power. In 1968 the group was formed while all the members were in college at Tuskeegee University. After being discovered by Berry Gordy, the Commodores went on to sell over 60 million records for Motown. With hits like “Machine Gun” and “Sail On,” the Commodores became proven artists. They proved it then. They proved it in 1986 with “Nightshift,” and now they are ready to prove it again.