Premier Productions and GRAMMY®-nominated singer/songwriter Jeremy Camp announce the I Still Believe Tour with special guests Riley Clemmons and Jordan St. Cyr. The tour will span 20 cities and will make its way to the Crown Theatre on Saturday, March 19. This tour will feature some of Camp’s biggest hits, including “Dead Man Walking,” “Keep Me in the Moment,” “When You Speak,” “I Still Believe” and many more!

“I can’t wait to get out on the road for the I Still Believe Tour in March,” says Camp. “It’s going to be an amazing sight to be worshipping again with people soon! I’m excited to have Riley Clemmons and Jordan St. Cyr, and love that they wanted to jump on board and be a part of this tour! Evangelism is such a huge part of my heart, so I want to encourage everyone to bring a friend who needs to experience the love of Jesus; that is what this night is going to be about, celebrating Jesus’ name!”

Tickets go on-sale Thursday, January 20 and can be purchased at the Crown Complex Box Office, at Leisure Travel Services on Fort Bragg, and online at CapeFearTix.com. Be sure to sign up for the exclusive pre-sale at https://www.istillbelievetour.com/.

Along with performing his biggest hits, this tour welcomes Riley Clemmons and Jordan St. Cyr as opening acts. In 2017, Riley Clemmons released her breakout debut single “Broken Prayers,” which has generated over 30 million global streams since its release. Her sophomore album Godsend was released on June 4th. Meanwhile Jordan St. Cry’s latest single “Fires” stayed on the Billboard Christian Airplay charts for 45 weeks and climbed to No. 5 while being played on major networks and stations for more than a year, reaching 7.7 million people a week.

“We’re so honored to be working with Jeremy on this special tour,” says SVP of Global Touring with Premier Productions, Dan Rauter. “His authenticity and passion have resonated with audiences from day one and made him an important fixture in our space. His message of hope and perseverance is as timely and relevant now as it was when he first burst on the scene with “I Still Believe.” We’re thrilled to be able to give audiences the opportunity to experience these songs live and hear Jeremy’s powerful testimony firsthand.”

Last year, Camp released his latest studio album When You Speak and followed up the album release with a tour by the same name. In 2020, Camp celebrated the release of the film I STILL BELIEVE, which chronicles his personal story, starring KJ Apa, Britt Robertson, Shania Twain and Gary Sinise. Camp also released a marriage book with his wife Adrienne, In Unison (April 2020, Harvest House) and released a greatest hits album in February 2020, along with re-releasing a memoir, I Still Believe (February, Thomas Nelson).

The I Still Believe Tour will kick off on March 10th in Amarillo, TX, and make stops in San Antonio, TX; Lexington, KY; Tampa, FL; Knoxville, TN and more before wrapping on May 1st in Melbourne, FL. For a full list of dates and cities, visit IStillBelieveTour.com. 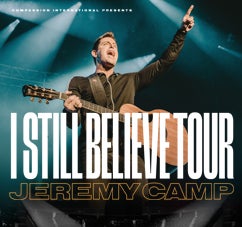