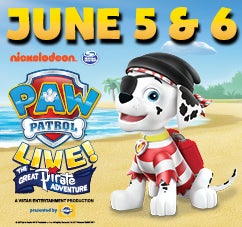 FAYETTEVILLE, NC (November 8, 2017) – All paws on deck! Nickelodeon and VStar Entertainment Group present PAW Patrol Live! “The Great Pirate Adventure,” an all-new action-packed, music-filled production based on the top-rated animated preschool series PAW Patrol produced by Spin Master Entertainment. The new live stage show, which follows the heroic pups as they embark on a pirate-themed adventure to uncover hidden treasure, will visit the Crown Theatre on June 5 & 6, 2018.  Tickets for both performances go on sale Friday, November 17 and can be purchased at capefeartix.com, by calling 888-257-6208, or by visiting the Crown Complex Box Office.

In PAW Patrol Live! “The Great Pirate Adventure,” Mayor Goodway is getting everything shipshape for a big Pirate Day celebration in Adventure Bay. When Cap’n Turbot falls into a dark and mysterious cavern, it’s PAW Patrol to the rescue! Chase, Marshall, Rubble, Skye, Rocky and Zuma save Cap'n Turbot and discover a secret pirate treasure map that leads them on an epic adventure. Over land and on the high seas, the pups set out to find the treasure for Mayor Goodway so the celebration can go on. Things get ruff when Mayor Humdinger wants to find the treasure first for Foggy Bottom. The pups need all paws on deck for this pirate adventure, including help from the newest pup who’s all ears…Tracker! Using their heroic rescue skills, problem solving and teamwork, the pups set sail to save the day. No job is too big, no pirate pup is too small!

PAW Patrol Live! “The Great Pirate Adventure” follows the first live show PAW Patrol Live! “Race to the Rescue,” which is currently touring through 2018. PAW Patrol Live! “The Great Pirate Adventure” includes two acts and an intermission, and incorporates an innovative costume approach to help bring the pups to life on stage as well as their vehicles and packs during the adventure. The performance is interactive, engaging audiences to learn pirate catchphrases, dance the pirate boogie and help the pups follow the treasure map and solve picture puzzles during their mission!

Tickets are available at Crown Complex Ticket Office, www.capefeartix.com or by phone at 888-257-6208.

FOR MEDIA ONLY: Advance phone interviews and in-studio interviews available. Contact maggieh@vstarentertainment.com to schedule. Photography and b-roll available upon request.

VStar Entertainment Group is one of the leading multi-concept entertainment platforms, producers and promoters of family-friendly theatrical productions, exhibits, installations and events. Headquartered in the Twin Cities, VStar has presented more than 36,000 performances worldwide over the past 38 years, touring across 40 countries and entertaining nearly two million guests annually. The company owns, operates and promotes tours across the U.S. and internationally, including PAW Patrol Live!, a high-energy musical adventure based on the hit animated series that airs on Nickelodeon and is produced by Spin Master; Cirque Dreams, which combines a cirque-style of performance artistry with Broadway theatrics; and Dinosaur Time Trek, an interactive prehistoric-themed educational exhibit with attractions for the whole family.

Nickelodeon, now in its 38th year, is the number-one entertainment brand for kids. It has built a diverse, global business by putting kids first in everything it does. The company includes television programming and production in the United States and around the world, plus consumer products, digital, recreation, books and feature films. Nickelodeon’s U.S. television network is seen in more than 90 million households and has been the number-one-rated kids’ basic cable network for 22 consecutive years. For more information or artwork, visit http://www.nickpress.com. Nickelodeon and all related titles, characters and logos are trademarks of Viacom Inc. (NASDAQ: VIA, VIAB).